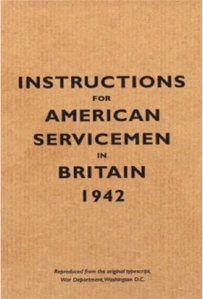 It’s a little over a week since I arrived home to find an envelope waiting for me from the Arts Council. We’d applied for funding to develop a new show, and I’d like to say there was a moment of fear, perhaps anticipation as I peeled it open; but the truth is you don’t even have to open the envelope to know. Rejected applications get a short pro-forma letter – perfunctory, polite, and disheartening. Accepted applications however get that magical YES-letter plus a lengthy contract and financial questionnaire, in duplicate. The envelope waiting for me was thick with paper – we had scored a winner! Then my flatmate told me our landlord was selling and we’d be homeless pretty soon – life has a way of keeping you in check.

The show we’ll be making is ‘Instructions for American Servicemen in Britain’, inspired by the 1942 pamphlet of the same name. Given to American troops on their way to Blighty, the Instructions were a crash course on the quirks and customs of British life, featuring everything from cricket and ‘indoor amusements’ to Sunday afternoons in the country. Our plan is to tour in late 2015, and for the moment, we’ve been awarded enough money to spend two weeks developing ideas, followed by a work-in-progress performance at The Theatre Chipping Norton.

We might have our funding, but there’s a lot of hard work to come. The last week has been full of meetings, phone calls, and all the joyous administration tasks that even a small show like ours requires. It’s a precious time though – before we get bogged down in all the details we can dream about what we really want to achieve. For me, that boils down to two things: creating a fun, silly show that takes an irreverent look at what it means to be British; and working hard to create quality interactions with the audiences and venues we tour to.

For the show itself, I can’t wait to work with Dan, Jim and Matt from The Real MacGuffins. They’re a fab comedy trio full of ridiculous witticisms, idiotic imaginations and a finely-honed inter-personal dynamic (i.e. Matt is the butt of every joke). They love to work directly with an audience, and I know that together we can create a joyous evening of entertainment. More than that though, I want the show to bring together communities that might not normally connect. Theatre, especially if you’re playing in a village hall miles away from the nearest town, is one of those rare times when communities come together with the sole aim of having a good night out. I’m imagining panto-style interactions, audience-members split into competing teams, and a big song and dance at the end. Theatre’s a social occasion, and I want Instructions to tap into that spirit.

As a theatre company, it’s not only a chance for Fol Espoir to deliver another great show, but also to deepen our relationship with our audiences. Our last show Winston On the Run toured to a huge number of venues. Perhaps because of this, it felt like we were in and out of theatres in the blink of an eye. This time we want to be of better service to the communities we tour to – offering workshops, post-show talks, educational activities for schoolchildren and more obvious ways in which people can stay in touch with us once we leave. I want Instructions to be more than just a show. I want it to be an event.