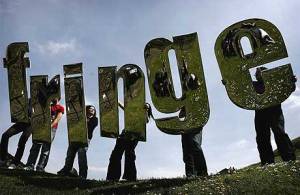 September arrives and yet another Edinburgh Festival sets into the Lothian air. For the first time in over a decade of Fringe-ing, I was up without a show. A strange affair, lacking the adrenaline of other years but certainly made up for by actually having time to hang out with friends, play with their kids, sight-see and, shock-horror, get to bed by midnight every day… a very grown-up affair.

Another big difference this year was not having a performer’s pass (which gets you free entry into other shows at your venue). Normally I’d watch a lot of stand-up, sketch-comedy and circus for free. With a limited budget, I decided to prioritise theatre. In hindsight, perhaps not such a good choice – I now realise how the heady mix of genres is what I so love about the Fringe.

One thing I definitely should have remembered though is how disappointing the International Festival tends to be. With a new Director and what looked like an exceptional line-up, I got sucked in again, booking for Ivo van Hove’s Antigone, Robert Lepage’s 887, Max Richter’s Four Seasons/Memoryhouse and David Greig’s adaptation of Lanark. Yet again though, alongside the vibrancy of the Fringe all these shows just felt bloated and leaden; it’s perhaps no coincidence that my favourite (Lepage’s) was also the most intimate. Many years ago the international festival used to run an exceptional series of late night shows at the Hub. Now it seems that only bigger is better.

I suppose my constant gravitation to the International Festival is part of a bigger dilemma I’ve been facing in my own work. Am I more interested in ‘art’ or ‘entertainment’. My pretentious side drags me towards the International Festival, Forest Fringe and Summerhall, where I’m nearly always left cold. Meanwhile, my non-theatre friends take me along to less culturally ‘valid’ work like The Last Great Hunt’s Bruce or The Pajama Men and I have a fantastic time. Which is not to say I don’t like serious work – I thought Chris Thorpe’s Confirmation was exceptional. Too often though I was frustrated by theatre-makers who think their message or artistry trumps their obligations to the audience. Or to put in another way, the biggest lesson I learnt this year was that my tastes aren’t as high-brow as I’d like them to be. Which actually is great. I can stop lying to myself, put down Hans-Thies Lehmann’s Post Dramatic Theatre and focus on creating the work that I do like to watch. Work that is thought-provoking, beautifully created and entertaining.

For example, my other stand out shows were Iphegenia in Splot and The Solid Life of Sugar Water. Both shows revolved around the loss of unborn children, so hardly light subject matter. But both had me laughing, crying, were beautifully staged and left me with a lot to think about. Iphegenia…, probably my stand-out show of the festival, finished with one of the hardest punches I’ve ever experienced. I was in sporadic tears all the way home.

A couple of wider issues also struck me this year. Firstly, I was disappointed about the predominantly introspective nature of the work I saw this year. Maybe I just missed them, but where were the big political shows? For all the shtick comedians get about taking over the fringe, at least some of them seemed concerned about what is going on in the world. Not so for the majority of theatre-makers. Have we all been cowed into submission? Do we think audiences don’t want to face these types of questions? Or has theatre become so middle-class that first-world problems are all that count?

If so, this lack of political will is something the arts are paying for – because if we take Edinburgh as a microcosm of the country at large, we’ve allowed ourselves to be utterly exploited for other people’s gain. Who does fantastically out of the Fringe? It’s not the performers, most of whom go home thousands of pounds in debt, or barely struggling into the next financial year. It’s people like the hoteliers, the shop-keepers, the bar-owners, the restauranteurs, the landlords, the big-name comedians and a handful of lucky shows. There’s been talk of a ‘tourist-tax’ for people visiting Edinburgh in August, which sounds like unworkable nonsense. But why can’t Edinburgh Council fully sponsor the Fringe Society’s running costs so that each company didn’t have to stump up the £295 registration fee? After all, it’s the artists who create the festival and the artists who bring in the business – in any other industry we’d be on commission.